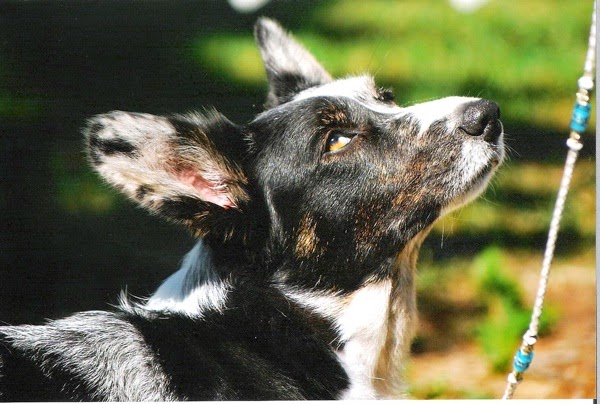 With the help of a gift card and some "Dory Bucks," I went shopping and got the kids some toys and treats. 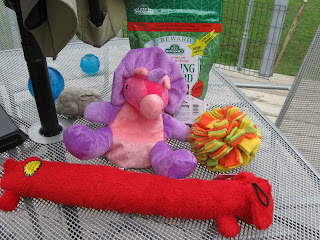 Tigger decided he couldn't wait for me to distribute the toys: 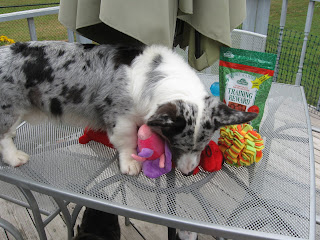 Two on a loofa: 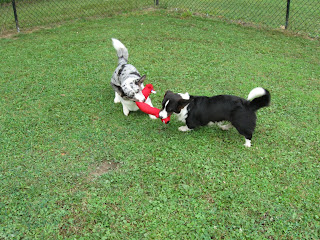 Three on a loofa: 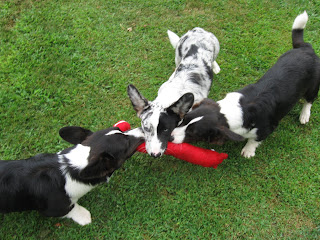 Four on a loofa: 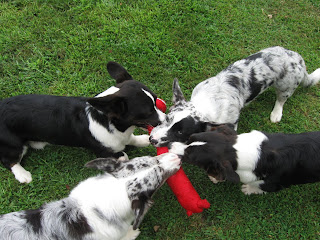 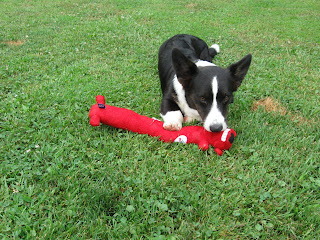 And, we also got a POOL! But Tigger thinks it's a giant water dish: 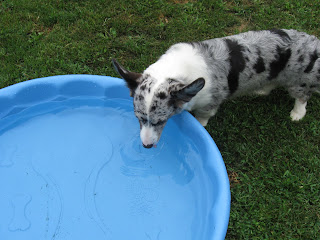 Dory says, Daaaaaaad! You're supposed to wade in it! 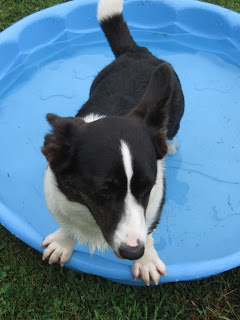 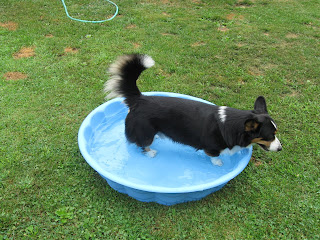 Finally, they just don't make loofas like they used to: 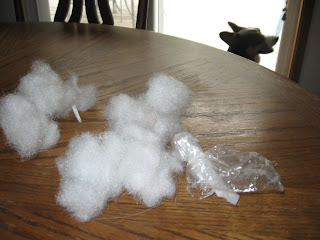 Posted by notenuffcats at 3:08 PM 2 comments:

The spoils of war

The sibs had a very nice weekend at the Marshall shows. They both showed very well, although by Sunday they were pretty tired of the 90-degree temps, and Bolt's handler (moi) went into la-la land and did not do a very good job. Bolt was BOW on Friday and won 1 point and a pretty Delft blue spoon rest. On Saturday, with his Uncle Marv at the helm, he was BOW, BOS and won his first 3-point major and two plush toys donated by BlueDog Cardigans (Auntie Penny!). Bolt gave one toy to Dory, and when they got home, Dad Tigger immediately stole them and ran off. On Sunday, Bolt was RWD and Dory was RWB to a major. PLUS, I bought them a bag of freeze-dried lamb lungs (nom and ECK) and two bottle-stuffed Skineez. It's all about the Cardis!

Here is some post-show play with the plush toys:

And Tigger says, "All chairs belong to me!" It's lightweight, recycleable, made in the USA, and only 13.99 at the farm store! 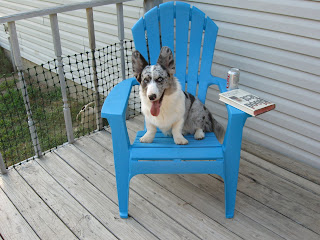 Posted by notenuffcats at 6:51 AM No comments:

A couple of photos from the Cardi Party we attended Sunday. We're looking at starting a new Michigan Cardigan club, so Jean Brown donated her house as the site and a group of us gathered for a potluck/fun match/play on the agility equipment outing. Everyone had a great time, and we will be proceeding with our plans. And, Dory was Best in Match and brother Baby Bolt was Best Opposite! Woo hoo! 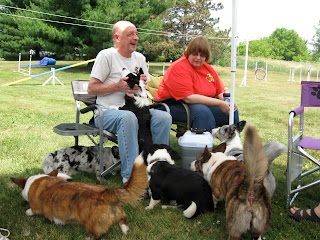 John and Kathy Hannah getting mobbed by their fan club. Ryan and the gang stayed home in the AC. 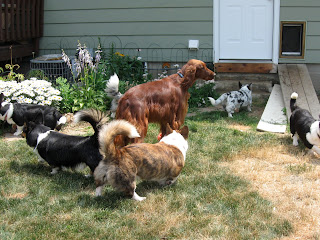 No, not a mismark, that's special guest Zephyr. There were 20 dogs in the yard, among them were four grand champions!
My brilliant idea of the week: The dog crate towels always get tangled up and it drives me nuts, so every day I untangle them. The other piece of the puzzle: Pillow shams. I never use them. I don't have enough pillows to keep some permanently "shammed," and I'm too lazy to take them off and put them on every day. So, shams + towels = towel-stuffed pillow shams as crate pads. So far, so good! 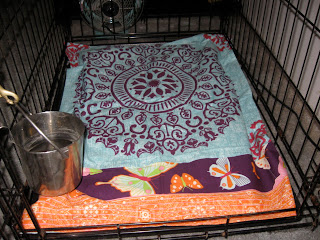 Dory gets the retro-'60s look 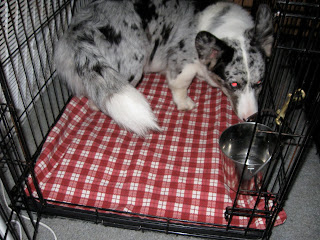 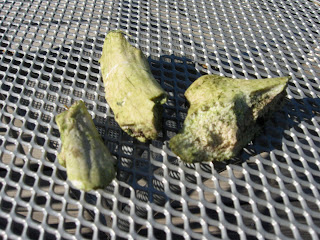 Finally, antler meets lawn mower. How many times have I told them, "Pick up your toys!" I admit, I was skeptical of the whole antler craze. My guys could care less about Nylabone products, and are very picky even about rawhides. But the antler was a huge hit, so much so that they spent a lot of time stealing it from each other. So, I'm hoping the Antler Guy is at the Marshall shows this weekend. He has a huge selection, and reasonable prices. Antlers, ho!
Posted by notenuffcats at 7:27 AM No comments:

The win photos from Valparaiso arrived today, Dory and Bolt look very nice, I think. Something fluffered Dory's ruff up a bit in the double shot. We'll have to work on our presentation! 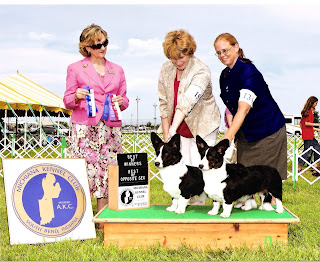 Thanks to Nancy Willoughby for helping with this shot. Dory BOS, Bolt BOW, both got a point. We like Judge Peggy Beisel-McIlwaine! 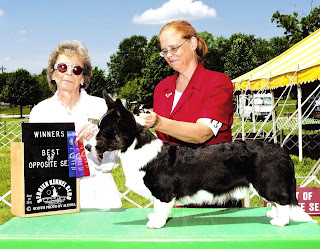 Dory was RWB the second day, Bolt was BOS for 1 point. That is the very sprightly Judge Francine Schwartz holding the ribbons.
Posted by notenuffcats at 1:24 PM 4 comments: